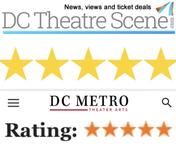 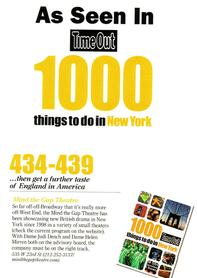 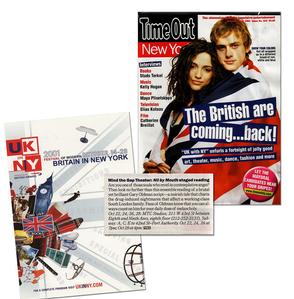 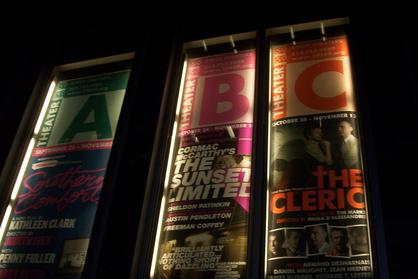 Director Paula D'Alessandris' staging reminds me of Michael Blakemore's Tony Award-winning direction for 'Noises Off'. The pacing is crisp and snappy, but you never feel like you're losing any of Sickles' tightly written script infused with plenty of theatre references.

​This comedy about bad theater and inappropriate backstage behavior is just gobsmacking good. Laugh-a-minute is an underestimation. Don’t miss it.

The room at Arena could not be a more perfect space for conveying rehearsal room ambiance and on-the-fly production values, and the actual director, Paula D’Alessandris, has done a bang-up job. The cast is first-rate and the laughs come fast and furious. Even the light and sound cues—called by the actual stage manager, Laura Schlachtmeyer—are funny.

overall title of Bennett's collection. These are stories to be told, not to be reenacted. She's given her

performers several stations at which to tell their stories - an armchair, a bench, a wooden chair and table -

and allowed her actors to simply exist in the space, to be there, and to tell us their stories, in their own time.

The result is a quietly poetic evening with bouts of whimsy, and an aura of wistful loneliness hanging over

the space like a mist.
- Zelda Knapp, aworkunfinishing.blogspot.com, July 22, 2013

Under The Blue Sky
Mind The Gap’s production is from top to tail a triumph. Six blinding performances, emotionally intense, hilarious, poignant, truthful, exciting, heartbreaking and uplifting, the audience quite understandably left abuzz. A coup de theatre that could only have been crafted by a cast and crew who not only understood, but genuinely cared about, a truly delightful text. Full credit must go to Paula D’Alessandris. As well as being Mind The Gap’s artistic director and founder, she directs the piece flawlessly. Bringing out the darkest of human nature with the lightest of touches, and punctuating delicate and often devastating conversations with real laugh out loud moments she creates a magnificently relatable and captivating piece of “must-see” theatre. It is a joy to behold and definitely my ‘Best of British’ for this month.
- Ben Bergin, Examiner.com, June 5, 2011

What director Paula D'Alessandris and her cast have created in this New York premiere is a low-fi production that puts the emphasis firmly on the fine performances....D'Alessandris and her cast ruthlessly avoid any choices that could overwhelm the script. What their mutual efforts have created is a melancholy examination of the connection between friendship and love that is almost excruciatingly intimate.
- Mark Peikert, Backstage (Critic's Pick)

Director Paula D’Alessandris does a masterful job with blocking and creating three separate spaces when we are really only ever on this one stage...
- Ralph Greco, Short and Sweet NYC

The Average-Sized Mermaid
The Average-Sized Mermaid may well be one of my favorite FringeNYC shows to date...Credit must also be given to the direction by Paula D’Alessandris, and the extremely comedic performances, particularly Vinnie Penna as Louis Leland and David J. Goldberg as Barry Pesci, which takes the very good dialogue and insane logic to a place where I was laughing hard enough that I worried I might upset the rest of the audience—only to realize they were right there with me...I really liked this show. I can’t stress this enough. It’s easily in my top three festival shows of all time and one of the best pieces I’ve seen in a long time.
- Chase Aiken, nytheatre.com, August 19, 2011

adrenalin...heart
Director Paula D’Alessandris makes the piece come alive by contrasting the calm feel of what is spoken out loud with the turmoil inside.
- Ed Malin, nytheatre.com, April 26, 2012

‘night Mother
… a magnificent production of ‘night Mother. You can see upwards of 300 plays a year and seldom witness the passion that has gone into Paula D'Alessandris’ direction - the attention to coloring every shadow of the mother-daughter relationship so sensitively that the audience wants to cry out to help. This is an incredibly powerful ‘night Mother… second only to the Broadway original with Kathy Bates and Anne Pitoniak.
- Ed Blank, Tribune Review, October 15, 1994

The Butter Bin
The Butter Bin offers a complex scope for your average director, a play odd in its dimensions and marked by very smart humor. That just means one thing - call Paula D’Alessandris for directing chores! D’Alessandris guides a radically gifted cast…it was by far the best ensemble of the year…
- Jeffrey DeVincent, City Paper, October 1, 1997

The absurdities pile up with stylish fecundity…Director Paula D’Alessandris whips them into a merry froth. My thanks for all the laughs.
- Chris Rawson, Pittsburgh Post Gazette, October 1997

Stampede!
...one of the most surreal comic ventures to hit the New Works stage in years…this loony story alternates between the reality of the stage and staged reality. And there are few better directors of the bizarre than the talented Paula D'Alessandris. She leaps atop the work with alacrity and drives an outstanding cast to unflagging levels of comic clarity and commitment.
- Jeffrey DeVincent, City Paper, October 3, 1996

Locating The Plant
One of the most pleasant surprises of the theatrical year…The cast is directed by Paula D’Alessandris with an acute ear for the rhythms, humor and tensions of a war-torn citizenry, and in each scene one feels the rewards of her understanding of scene structure and of actors. Locating the Plant is a production worth attending.
- Phil Hopkins, The Irish Voice, September 20, 2000

Directed with a suitably no-frills efficiency by Paula D’Alessandris [the play] comes across as an entirely credible and accurately reproduced portrait of an intensely lamentable moment in fairly recent Irish History.
- Joseph Hurley, Irish Echo, September 20, 2000

Walter Vs. The Water Authority
Director Paula D’Alessandris has a lovely, light, steady hand. She has no need for flashy directorial choices; she understands that a play about simple people requires simplicity. She also has a fine sense for silences. Most directors are afraid of silence, she let’s the characters settle into lives where the most important things are often left unsaid. D’Alessandris has coaxed carefully modulated performances.
- Montserrat Mendez, nytheatre.com, August, 2009

Apathy: The Gen X Musical
The play is helmed nicely by Paula D’Alessandris of Mind the Gap Theatre, fame. She has a feel for the style of the play and has done a great job of keeping the actors reigned in. With this bunch that was probably no small task. The ensemble is extremely talented and tight. Apathy: The Gen X Musical is little gem. The time, talent, and care these folks put into making it happen shows.
- Leslie Bramm, nytheatre.com, July, 2005

Grandma Sylvia’s Funeral
“…quite funny in a totally outrageous way not unlike Monty Python.”
- Joel Rothman, The Jewish Chronicle, February 5, 1998

Drinking In America
“Directed by D’Alessandris…the piece is painfully funny and at the same time bone chilling.”
- Ted Hoover, In Pittsburgh, February 10, 1994

Monster
....a demanding and intensely felt play... a must-see for those wanting another view of why and how the Holocaust happened...
Paula D'Alessandris directs with economy and a fine naturalness...
- Richard Rauh, Pittsburgh Post Gazette, February 7, 1997

BritBits
Mind The Gap, guided expertly as ever by the multi-talented Paula D’Alessandris, will be performing the seventh installment of their critically acclaimed ‘Brit Bits’ series. Brit Bits contain all that is best about New York theatre...Brit Bits is a necessary staple of the cultural calendar...With a varied (and skillful) collective of writers involved pathos, humour, farce and insight can be expected from an always excellently cast group of Limeys and Yanks.
- Ben Bergin, NY British Cultural Examiner, June 9, 2010